Well, exactly two weeks after taking my VCP510 exam I received a confirmation email from VMware on the status of my VCP5 certification.  I say status, and not approval, because there are still steps that need to be taken in the myEducation portal.

So after you take you exam –and I’ll assume you pass.  If you’re like me you’ll face a nervous wait to receive an email from VMware confirming whether you have met all the prerequisites.  For people who had taken the exam around February 2012 the wait was as long as 4-6 weeks.  At this time of year the wait is much less.

The email states there are three things I need to do before my transcript will reflect my certification status.

After logging into myEducation Portal and selecting myTasks.  I could now see a new Plan with an option to Manage.  Selecting this brings up very detailed track list of prerequisite courses and exams.  VMware should make this list accessible as it would make understanding the certification process much easier. 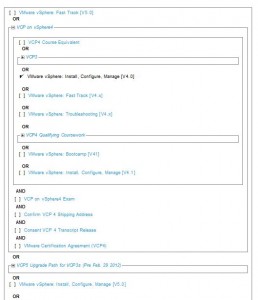 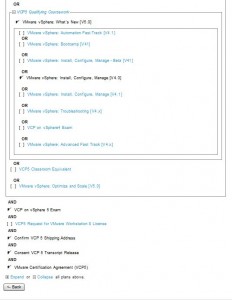 It would appear that the VMware email is a little out of date as there is now a fourth item that needs to be completed in addition to the above three.  You now also need to select the link to request a VMware Workstation 8 license.  Kind of a strange step, but a free license, I’m more than happy to go along with it.

Once all completed, the progress should now state Completed at the top right of the Plan.  VMware say to wait 24 hours for the certification to appear on your transcript.  I received an email a couple hours later.

Unfortunately the process continues.  The mailed out certificate takes 4-6 weeks to arrive and access to the VCP Portal takes up to 2 weeks.  But hey, at least I’m finally recognised as VMware certified.