For years I’ve been setting the Guest OS type in VMware vSphere and Workstation and for years it’s bugged me.  What does it really do?  Does it really matter?  Sometimes just for fun I like to set the version to Windows but install Linux.  Each time I’ve always looked out the window towards the sky to make sure it’s not falling.

First, the most obvious thing it does is give us a whole bunch of default recommended values for the specified OS Version when creating a VM.  It can also restrict what devices are available to us to use.

For example if we set the OS Version to MS-DOS we get 16 MB has the default recommended memory and a 2 GB Hard Disk using an IDE controller.

Second, it defines maximum values we can use.   This can be a little misleading because your true maximum values are always dictated but your Sphere version and edition.  I won’t get into this too much as this blog revolves around Guest OS type.  If we set the OS type to Windows 2000 our max vCPU is 8.  Whereas if I set the OS to Windows Server 2012 (64-bit) our max vCPU is 64 under Enterprise Plus Edition.  If I was running Standard Edition we would be limited to 8 vCPUs for both OS types.  Confused yet. 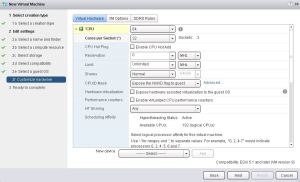 Third, and now a more important consequence of selecting the right OS Version is VMware Tools.  If you push out VMware Tools via vCenter it will use the Guest OS Version to determine what Tools version it will attempt to deploy.  Mixing Linux and Windows OS Versions will cause VMware Tools deployment to fail.

Forth, we have a few lesser consequences.  Some VM options are only enabled and available to certain OS Versions.  Fault Tolerance is not supported on certain types of OS and selecting the wrong OS version in vCenter could disable this setting.  The same can be said for HotAdd/Hot-Plug.  The wrong OS version can prevent this feature being used.

In conclusion, setting the OS Type / Version to match the underlining OS is recommended.

Cannot change the guest operating system selection of a virtual machine in ESXi 5.1 (2020801)

2 thoughts on “Who cares about Guest OS Version in vCenter”