When Microsoft and Jeffrey Snover released PowerShell on Linux a few months back we knew PowerCLI running on Linux wasn’t too far away.  Well, an awesome demo from Alan Renouf running PowerCLI in a Docker container was probably a giveaway 🙂

Well since then we’ve been patiently waiting, and hearing rumors of a Fling, for the release.  Earlier this week VMware finally released that Fling.  And that haven’t disappointed.  VMware have provided a number of different methods to run PowerCLI Core --OS X, Linux, and Docker.  Skimming through the Instructions PDF on the Flings site by far the easiest method has to be the Docker image from Docker Hub (assuming you already have docker installed).

I decided to try out this docker image and was pleasantly surprised at how easy it was.  Boy, I miss the old days of Linux where I had to compile and install everything, then troubleshoot, and repeat.  Using an Ubuntu 14.04 build it’s as simple as running two commands.

First pull down the docker image from Docker Hub.

Then run the container!

And that’s really it, kind of.  There is one more command you’ll have to run to actually connect to a vCenter or ESXi host.  Without it you’ll receive an Invalid Certificate error which will prevent you from connecting.

After that you should be able to connect as normal to a vCenter. 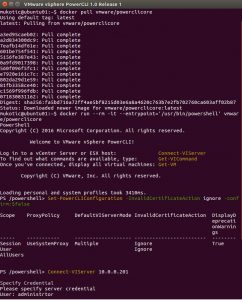 As the doco states not all the modules are available yet.  Currently just the Core and VDS cmdlets.  A quick check shows we have 315 available to us.  Which, to be honest, is a huge amount.

I haven’t done too much with it yet.  Though I have already noticed a few odd issues and errors.  It’s hard to say if it’s PowerCLI Core related or PowerShell.  One notable issue is when pipping a PowerCLI cmdlet multiple times on the command line it would intermittently fail.

The important thing to note here is this is a Fling, which as I’ve mentioned before, is unsupported and comes with no guarantees.  Not only that but it’s build upon an Alpha build of PowerShell 6.  Put it together and sure you’ll probably get unexpected results sometimes.

Never the less this is another get testament to VMware’s commitment to PowerCLI and PowerShell.  I’m excited to see PowerShell and PowerCLI continue to further develop and mature on Linux and open the door to a whole new slew of developers.