The second appliance I’m trialling for my Virtual Storage Appliance experiment is FreeNAS.  The history of FreeNAS goes back to 2005 but trying to understand that history and it’s version numbering really just hurts my head.  The current version of FreeNAS I’ll be trialling is FreeNAS 9.1.1.

The original FreeNAS project started back in 2005 under a 0.x version numbering scheme.  It continued to be developed until 2011.  At which point the story differs depending on what you read.  The nearest I can ascertain, FreeNAS was aquired by iXsystems in 2011.  The FreeNAS version numbering changed to fall in line with FreeBSD.  With version 8 being the current FreeBSD release so the next FreeNAS version was also 8.  In 2012 the NAS4Free project was created.  NAS4Free make a point that it is not a fork of FreeNAS but the direct continuation of FreeNAS prior to it’s sale to iXsystems.  The actual fork is FreeNAS after its purchase by iXsystems when it went through a complete code rewrite.  But, that’s enough of the background.

I ended up documenting my complete FreeNAS install process similar to OpenFiler.  I’ve decided not to go through the entire installation process (that may come at a later entry).  Instead I’ll focus on what FreeNAS is capable of offering, and it does offer a lot.  I was a little worried starting with OpenFiler that it would be downhill from there.  It certainly wasn’t the case with FreeNAS.

After installation, the initial configuration of FreeNAS is web driven, just like OpenFiler in Part 2.  The admin portal is split into two panes.  Much like something you would see on a Windows box.  A drop-down menu system on the left with the configuration and settings on the right.  It’s actually really nice, fluid, and fast, in some ways better than some of the enterprise products on the market.  The menu system has almost been ordered in the sequential steps that you want to configure it in.  What I did find slick was you could open up a GUI CLI console window from the web browser. 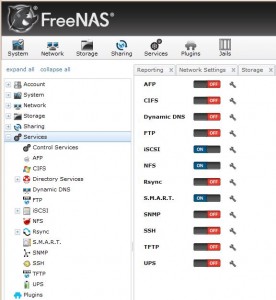 I found the doco on FreeNAS excellent.  It’s well written and flows well.  I say it flows well because to the uninitiated you can basically start at the top of the doco and work your way down to get yourself up and running quickly, rather than having to read through 100’s of pages of documentation on the ins and outs of all the features.  On the features side FreeNAS is your Swiss Army knife of NAS appliances.  You have your stock iSCSI, NFS, CIFS support.  You also have AFP (Apple Filing Protocol) with Apple Time Machine support, but who cares about Apple 😉   FTP and TFTP servers.  Rsync replication and File system snapshotting.  It also has a plugins architecture which is really just a simplified way of installing add-ons and software via the GUI.

Where Openfiler was a little more intuitive to create and present a LUN over iSCSI.  FreeNAS did require a little more thought and some reading.  They bring a few more concepts to the table than most which just creates a whole lot more steps to get to where you’re going.  For example, you will first create a volume from a pool of disks then a zVol under that.  In the iSCSI section you will create an Extent which you’ll associate with that zVol as the device.   You will then create an Initiator which will allow you to create a Target and then associate the two together… Still with me.  You then take that Target (with the associated Initiator) and associate that with the Extent.  If all goes to plan and you created your Portal correctly it should have a LUN that’s presented out and able to be connected to from another device, e.g. ESXi.

Fortunately NFS was sooooo much easier to setup.  I’m not a big fan of NFS but as much as I don’t like it I found myself willing to use it more as it was orders of magnitude simpler to setup.

Finally, one thing that stood out was that FreeNAS appears to support a few vSphere VAAI primitives, ATS and Zeroing File Blocks.

Where ESXi has no idea what’s going on with OpenFiler.  With FreeNAS it’s able to take advantage of some real storage performance benefits.

I feel I’ve given FreeNAS a good workout.  Where I was happy to move on from OpenFiler after a few weeks.  I’ve been using FreeNAS for a few months now.  I’m glad I held off on writing this entry until now.  If I had written it up after the first two weeks I would have said it was too convoluted to use and to stick with something else like Openfiler.  Having past that learning curve it’s quite the opposite now.  The granularity of what it can do, it’s feature set, and community support is a great selling point.