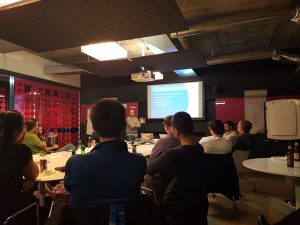 I’m not sure what it’s like in other major cities around the world.  But currently Melbourne is going through an IT meetup boom.  On any given week you can find at least one if not multiple meetups going on somewhere in Melbourne.  A big change of years past where we would have only a couple major conferences a year to look forward to.  It’s really quite an exciting period for meetups we’re going through.

So what is going on with all these meetups  —Meetup being the new buzz word we’re seeing slowly replacing the traditional User Group we’re all probably use to.  I think it’s in small part to do with the website meetup.com.  Sure, many of these User Groups have existed well before meetup.com became a thing.  But to find them you had to be part of the right Facebook group, follow the right twitter user, or just learn of it through some word of mouth.  I lost count before meetup.com on how many User Group meetings I missed by learning about it the next day.

We now have a common place we can visit to find all these User Groups and meetups.  Type in DevOps, PowerShell, VMware and dozens of meetups pop up in your local area.  RSVP and see all the other local users also going, not sure what the meetup is about, post a quick question and receive an answer right back.  There’s an update to a meeting, receive an email notification immediately.  I see it as a symbiotic relationship between a globally accepted meetup site and the user group.  We at the Melbourne VMware User Group have even started using it in conjunction with the traditional VMUG website to extend our community base. 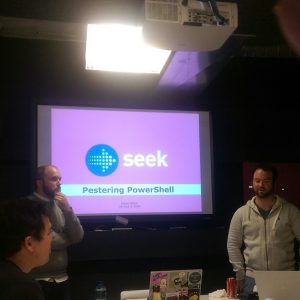 This is how I found out about the recent PowerShell meetup I attended in Melbourne.  With all the scripting I’ve recently been doing in PowerCLI and PowerShell I wanted to expand my horizons a little further and find out how the wider PowerShell community works.  The group has only existed since the start of the year and this was their fourth meetup held in the seek.com.au offices.  The setting for the meetup was very casual and devoid of any advertising or marketing.  That is if you can overlook the office seek logos all over the place.  But considering the worst seek can actually do is find me a new job I’m more than happy to tolerate this 🙂   Of course there was the obligatory Beer and Pizzas which we all know elevates a good meetup to an awesome meetup. 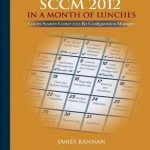 A found the format and atmosphere of this PowerShell meetup very appealing.  Heavy on practical content & demos and light on PowerPoint slides.  The setting around a large boardroom table with beer and pizza in hand also lead to a more comfortable environment to engage with community and presenters.  The meetup tended to have a slant towards DevOps practices using PowerShell rather than using PowerShell.  So less about how to connect to this server or use that cmdlet and more around processes and integration.  I was also lucky enough to receive a copy of the book, Learn System Center Configuration Manager in a Month of Lunches, from its author James Bannan.

Due to work commitments of the organiser, the PowerShell meetup was pushed out a day which turned out conflicted with an Azure meetup on the same night.  With so many IT meetup groups current listed and running in Melbourne.  There’s bound to be a small culling, a kind of survival of the fittest, happen.  So whether this PowerShell meetup group succeeds or not only time will tell.  I certainly hope it does and they continue to find that DevOps centric content it aims for.

Until the next meetup…