The last few months have been extremely fun for me.  I purchased a HTC Vive and have been enjoying every minute with it.  I’m not a huge gamer but I absolutely love the immersion factor.  I’ve lost count of the times I have got lost in games like Onward for hours on end.  The realism and social aspect of coordinating with your team mates on how to take the objective.  The absolute fear of crouching behind a wall while the enemy next to you discusses where you are.  An experience that’s hard to convey.

Games aside though, VR also has the ability to mirror your desktop and applications too.  Nothing like Minority Report or that awesomely realistic movie Hackers.  But think more a VR room with a computer screen in front of you that you can enlarge or shrink to suit your view.

So that got me thinking.  There are a few different VR apps that let you mirror your desktop in VR.  I decided to try out Bigscreen, mainly because it’s free!  And hell, because this is a virtualization blog, I obviously had to try out the vSphere Client to see if I could practically manage my vCenter Homelab environment.

It took a few attempts to find the best viewing mode and way to manage vCenter with the vSphere Client.  I first tried the large projector view on the wall in the VR room.  This turned out to be an absolute joke.  Imagine the worst, lowest, quality projector, and then try reading small text from the other side of a room.  Then think of something worse.  Okay… it wasn’t that bad but still. 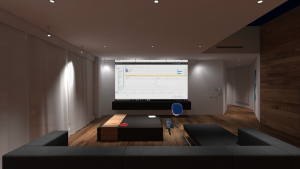 Failing to use vCenter in the large projector mode view

The best mode I found was literally just sitting down in a chair.  Switching to the floating screen mode and enlarging the screen to encompass my field of view.  Then placing a small curve to the screen to rap a little around me. 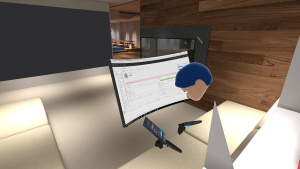 Something’s red in my vCenter environment

I first tried managing vCenter with the HTC Vive controllers.  The controllers basically act as laser pointers.  You can pull up a virtual keyboard and laser zap the keys with the controllers as well as move the laser point around on the screen like a mouse cursor.  Using projector mode this was okay but up close it was really awkward.  Ultimately using the physical mouse and keyboard was most practical.  And it was practical.  As long as you can position your hands in the right spot and touch type there was no issues.  You just have to adjust to what feels like a 100 inch screen in your face.

Bigscreen has what they call Mutliplayer rooms.  This is where you can join and create a new room where people can share you screen experience.  I did jump into some of these rooms where movies were playing and had a little chat to the other guests.  I wasn’t game enough to create a room and share my vCenter screen though.  I just felt that the VR community wouldn’t have the same appreciation for my vSphere Homelab environment 😛 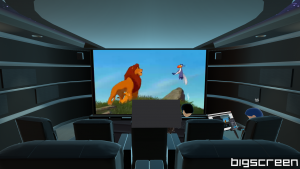 You can imagine how this multi-user room experience could be interesting though.  Inviting a friend / service desk into your private VR room to help you out on an issue in your environment.  Actually being able to point on the screen and talk through resolving an issue.  Waving your hands in frustration when the service desk can’t fix your issue.  It reminds me of the book Ready Player One.  A dystopian future where lives are lived out in a VR world and virtual chat rooms.

So alright, all of this was a big gimmick.  An excuse to talk about my HTC Vive and somehow justify it on my virtualization blog with vCenter.  It was fun, though, I’m not holding my breath for vCenter 7 VR.  But maybe a fling 🙂