Every time I get asked about the Intel NUC the number one question that comes up is, ‘Can I have 32GB in it?’.  Up until recently my response was ‘No’.  My response was like I had shattered a childhood dream or something for the person asking.  Most people I talk to lose interest in the NUC at this point.  It’s quite frustrating because it’s a great little device and the official 16GB limit when combined with multiple NUCs is still a great option for a home lab.  The relatively low price and power consumption is hard to beat, especially compared to something like a Super Micro that seems to be a home lab favourite to achieve 32GB+.

Recently I was put onto I’M Intelligent Memory who specialise in DRAM since 1991.  Going back as far as early 2014 I’M have been producing a 16GB SODIMM module.  I’M currently produce a 16GB SODIMM module which is aimed at 5th Gen Intel Broadwell processors.  They claim that their 16GB SODIMM modules are compatible with notebooks and Intel NUC i3/i5/i7-5xxxU CPUs. 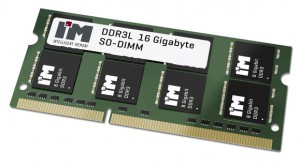 I’M reference quite a good article on their website written by PCWorld on the 16GB SODIMM module used in an Intel NUC; it’s well worth a read.  PCWorld even approached Intel for their opinion on the module in its NUC.  While Intel would not validate the module for use in the NUC they did say that “technically” there is no reason why it won’t work.

For some time I had always been under the impression that memory was limited by the CPU.  In the case of the Intel NUC, however, it appears this is more an issue of JEDEC SODIMM standards preventing larger than 8GB SODIMM modules.  I’M work around some of the JEDEC standard limits by stacking chips on top of each other.  This allows them to double the density of an SODIMM, but no doubt makes them not standards compliant.

The one caveat; though, is the price!  I recently purchased 16GB (2x8GB SODIMM modules) for a new 5th Gen NUC for $75 US.  I’M’s 16GB SODIMM have come down recently but are still going for a whooping $285 US (325 Euro), which is approximately three times the cost per a Gig.

For all those people out there that have been dismissing the NUC due to the 16 GB limit they now have to re-evaluate their position.  If 32GB is such an important factor for them, it’s now achievable with price being the new factor in the equation.