A few days ago ESXi 6.0 Update 2 was released.  Quietly added in was version 1 of the ESXi Embedded Host Client.  I’ve spoken a few times about the Host Client.  It started out as a VMware Fling by VMware engineers Etienne Le Sueur and George Estebe.  Since then it has gained a hugely positive response from the community that it has finally found its way into ESXi.

If you’ve recently upgraded or installed ESXi 6.0 Update 2 you can access the host client via a browser connecting over standard SSL (https:/myesxi-host/ui/).   You can login with the host’s root account.  If you’ve never seen the Embedded Host Client before you’re in for a huge surprise.  You’ll be amazed at how similar it looks to the vSphere Web Client.  Not only that but it’s extremely snappy and fast built upon HTML5.

I recently upgraded my NUC home lab hosts to Update 2 to check out the production build.  It looks and feels just like the Tech Preview.  It’s going to be a great replacement to the C# Client.  If you’re running a previous Tech Preview release of the fling there’s a few things to note before you upgrade to Update 2.  Initially I did an upgrade of a host with an old Tech Preview 5 fling installed.  Update 2 left that version of the fling in place.  So on my subsequent hosts I removed the Tech Preview fling before upgrading the host.  That resolved the issue and installed the v1 production release.

Below are the steps to remove the Tech Preview fling before upgrading a host.  The -f represents a force removal just in case you have any third party vibs that may conflict with the uninstall as I did.

If, like me, you upgraded a host before removing the Tech Preview version of the fling. You can download the official Host Client from the VMware download portal.  List with the ESXi 6.0 U2 Zip and ISO images is the Host Client VIB and Offline Bundle.  Then just run through the steps to remove and install the VIB.

There is a newer build also available up on the flings page --Tech Preview v6.   I chose to upgrade to this build as it’s just my home lab.  The process is simple, I outlined the steps to update the Embedded Host Client to a new build in a previous post. 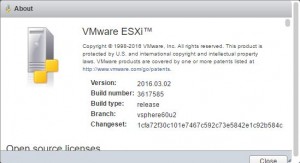