It was a tough decision.  Hit up the Cohesity party and watch Snoop Dogg perform or participate in the VMware Code Hackathon.  No, the decision was easy, I was always going to take part in the Hackathon.  I had regretted not taking part last year and I was super keen for this year’s hackathon, I wasn’t going to miss it.  I think it’s safe to assume I chose wisely.  With my team, Team vMafia, coming away with the winning project and an impromptu segment on Virtually Speaking! 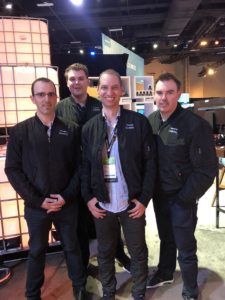 This year’s Hackathon broke from the format from previous years.  Whereas in previous year you showed up, attempted to form a team and an idea, then execute all within a handful of hours.  This year the Hackathon chose to leverage HackerEarth and give participates three weeks to create a team and build out a hackathon idea.  Without a doubt this was the single biggest improvement to the format of this years event.  Leading to some great projects being built.

Rewind a month, In the week leading up the Hackathon I started thinking about an idea I could submit.  Struggling to think of something I started playing a bit of buzzword bingo.  PowerShell and PowerCLI were big passions of mine.  Docker was an area I wanted to explore more into and I had wanted to learn more about what the vSphere SDK could do.  At that point an idea just naturally presented itself.  Could you run a PowerShell console with PowerCLI modules inside the new HTML5 vSphere Client?

At this point I didn’t know I had a good idea, let alone just an idea.  I ran it past some friends within a local Aussie Slack group I’m part of.  It went down extremely well but I still had my doubts.  So I did what anyone would do and went to ‘other’ friends who also thought it was a great idea.  So OK I thought, I have an idea.

Having recently quit my job I was able to focus 100% of my attention to the project.  Great for me and the Hackathon, I guess bad for everyone else with jobs 😛  I formed a team and without any persuasion a number of the Aussie Slack team jumped on-board including Anthony Spiteri, Matt Alffford, and Tim Carman.  We were going to need a lot of help so I reached out to a few friends for assistance.

First up was my ex-manager John Imison for some assistance around Docker.  Installing Docker and running a container is one thing.  But building a container image was something new.  John provided some great advice and ideas around building the docker image.  Actually far too many for a Proof of Concept hackathon idea that I could implement in a practical timeframe.  If this project continues to develop past hackathon expect to see some more of his ideas integrated in.

Next I hit up my Developer brother-in-law Simon Mackinnon.  After spending a couple days crying in front of my computer attempting to build and configure my vSphere SDK environment.  I went to Simon for help in decipher the vSphere Plugins.  Simon helped put us on the right track with finding the easiest solution to embed a console into the vSphere Client.

After a solid week of learning Docker and the vSphere SDK it was time to actually build something and put it all together.  Believe it or not this was actually the easiest part of the whole project.  Once I knew how to build a Docker image it was just a matter of customising it for my purpose.  The same went for the vSphere Plugin.  Take a sample plugin and modify it for purpose.

The night of the Hackathon at VMworld was fairly cruisey for Team vMafia 2.0.  Our project was built.  We performed some final testing to prove it all worked.  We gave some of the judges a walk-through of what we built.  I should point out that the night was extremely well run.  Previous years had some controversy around the event.  None of that existed this year.  Two rounds of hot food was served with lots of drinks and lollies to be had.  With WiFi and Internet stable and strong.  The event was pushed back from an original start time of 6:30 to 7:30.  This was due to some of the judges holding training sessions / presentations on some of the hackathon themes.  At 10 PM all the teams were given two minutes to present their ideas and projects in front of a projector.  A completed project was not a requirement to present.  The judges had a number of criteria they were working off for judging, such as how well you kept to your 2 minutes and how well you conveyed your idea.

Team vMafia were one of the last to present.  I was certainly not confident as there was some great ideas before us.  I spoke for our team.  I’m not sure how long I presented for but it was definitely less than the 2 minutes.  During the entire presentation i had Anthony Spiteri whispering in my hear, ‘hurry up, don’t waste time, go go go’.  Distracting, yes, but he did keep me on point.  The judges then left the room to vote.  They came back pretty quickly with it being a unanimous decision that Team vMafia had the winning idea of an integrated PowerShell console inside the H5 vSphere Client.  It was not until they called our name that I thought, ‘Hey, maybe we do have a good idea’. 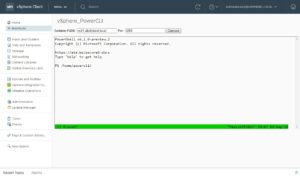 Screen of vSphere PowerCLI being used within the vSphere Client

The night didn’t quite end there for Team vMafia.  After the event we passed by Eye Candy in Mandalay Bay where we ran into the Virtually Speaking guys, Pete Flecha and Glenn Sizemore.  While Anthony denies it , I think this was his master plan for us to bump into them.  We had some great conversations with the guys and they were super excited for our Hackathon project and win that they invited us onto the podcast the following day. 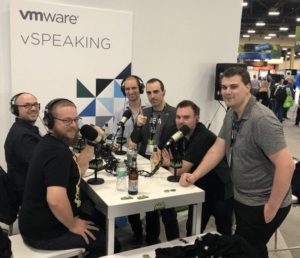 The episode of Virtually Speaking with Team vMafia can be found here.   While I find it hard to listen to myself I’m assured that the segment was really good and funny.  Our segment also managed to make the cut in the same episode as Micheal Dell and Pat Gelsinger which I have to say is pretty cool.  I huge thank you to Pete and Glenn for allow us to come into the show!

Finally I can’t end without linking to the actually project.  During the development I used my own private repos but have now moved it over to my GitHub page.  The project has the very original name of vSphere PowerCLI.  As far a disclaimers go the project is free to download and use at will.  I’m not really holding any restriction on it.  It was always just a Proof of Concept idea I had.  The instructions are hopefully fairly easy to follow.  Most people have been taking a snapshot of their VCSA and using the option to run Docker on their VCSA.  If the support is there I’ll be considering developing the project past hackathon idea.

Thanks for everyone’s support and kind words and let me know if you’d like to see the project developed further.